Act4New: Assessment of the online hackathon organised by Syntec Numérique

Finding digital solutions to improve everyone's post-coronavirus daily life was the challenge of Act4New. The initiative, organised by Syntec Numérique and its partners and supported by Cédric O, Secretary of State for Digital, took place from 30 April to 17 May 2020. On Sunday 17 May, the Jury deliberated during an online ceremony and rewarded the winning team for its prototyping of a solution that allows the transparent tracking of donations made to health organisations thanks to blockchain technology. 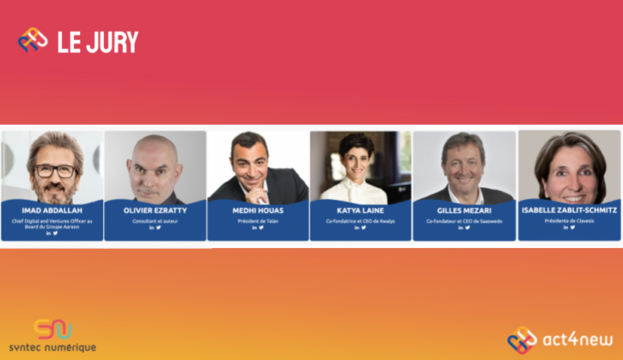 The Jury was won over by a solution that allows the transparent tracking of donations to health organisations thanks to blockchain technology.

36 hours: that's the time that was left to the hackathon teams from May 15 to 17 to create a prototype of a digital solution to meet the challenges of the post-Covid19 society. What they used as a basis: ideas from the general public, which had previously been posted on the Act4New website by volunteer participants. Streamlining travel, digital authorisation to make purchases in a pre-reserved time slot, support for people at risk... several themes were submitted to the developers for their expertise.

At the finish line, a prototype based on blockchain technology was unanimously declared the winner, that of the Covidonationers team. The solution developed allows all citizens to follow the path of donations made to health organisations in complete transparency (see the video of the prototype). The Team4Change team also stood out and won the ‘Coup de Coeur’  Jury prize for a digital identity construction device that also uses blockchain technology (see the video of the prototype). This solution could, for example, make it possible to dematerialise, secure and certify the exchange of official everyday documents.

"A real citizen commitment and a great general mobilization for Act4New, ideas that show that in tomorrow's world, we will be more supportive and caring towards each other, a majority female participation, quality projects, a promising winner, something to be really proud of having participated in this operation." comments Mehdi Houas, President of Talan and President of the Jury.

"Our companies and our partners played the hackathon game: starting from a blank sheet of paper, grasping tomorrow's issues, germinating very beautiful ideas, combining the technical skills to implement them, bringing together great teams, in a very tight time frame... We come out full of energy from this experience of the first hackathon for Syntec Numérique and its partners." added Isabelle Zablit-Schmitz, President of Clavesis.

A total of 6 prototypes were selected by the Act4New Jury, made up of Syntec Numérique administrators: Imad Abdallah, Director of Strategy of the Aareon Group, Mehdi Houas, Chairman of Talan, Katya Lainé, CEO of Kwalys, Gilles Mezari, Vice-Chairman of Syntec Numérique, CEO Taas and co-CEO of Saaswedo, and Isabelle Zablit-Schmitz, President of Clavesis, and with the participation of Olivier Ezratty, consultant in new technologies and author.

Six prototypes were developed in thirty-six hours during the hackathon

Act4New is an initiative that took place in several stages. The international call for ideathon was thus launched on April 30, 2020 by submitting to citizens eight problems to be solved in order to find ideas to improve the daily life of all in the context of the crisis related to Covid-19.

By May 5, 2020, Act4New had collected nearly 60 ideas from the public. Twelve experts then met (from 6 to 7 May 2020) to select the thirty most promising ideas. These ideas were then put online on the website so that development teams could be formed and seize these ideas to turn them into digital solutions during the prototyping weekend (15 to 17 May 2020).

Ten teams were formed on the starting line at the beginning of the prototyping weekend. Several coaches (Design, Product Management, etc.) were at their disposal to accompany them if necessary during development. Finally, six teams made it to the technical validation of the prototypes by Act4New's technical experts. These six teams successfully passed this test to present themselves and then pitched in front of the members of the Jury. The Act4New initiative then ended with a ceremony to announce the results and close the event on Sunday evening, May 17.

The six prototypes developed by the teams are as follows:

A majority of women participated in the hackathon, with a strong engagement of African tech communities.

Noteworthy during this hackathon: an accentuated female representation with 54% female developers and four team leaders among the six teams that finally pitched on Sunday May 17 to the Jury. The important engagement of the African and North African tech communities is also to be underlined: Tunisia, Algeria, Morocco and Ivory Coast were countries represented among the participating teams.

Olivier Ezratty, consultant and author, extended "congratulations to all the teams who prepared a quality prototype so quickly, and to the commitment of the women who took the lead in the majority of these projects."

Support offered to develop the eco-responsibility of all the selected projects.

In recognition of the work carried out by the participants in the hackathon, Greenspector, a startup specialising in the energy-resource efficiency and performance of digital services and a member of Syntec Numérique, wanted to offer all the participants who pitched in front of the Jury dedicated support to limit the ecological impact of the prototyped digital solutions. The winning team will benefit from access to the BrandBootCamp, a two-day creative and collaborative workshop to develop its brand, offered by BrandSylver, a creative and branding agency.